New map on impunity for Mexico and Brazil

Once again proof that all it takes is some encouragement and a few — VERY FEW — bucks to put together a major effort to expose violations of human rights, including freedom of speech and press. 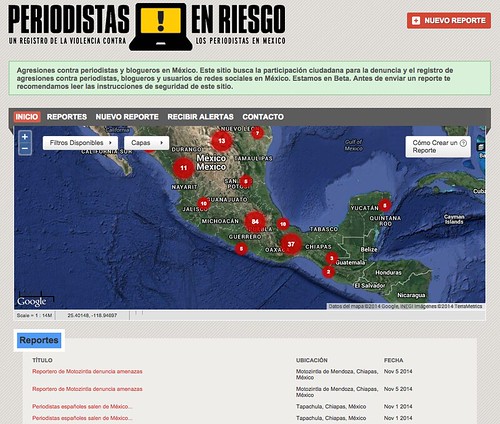 The crowd-sourced maps will help journalists know more about the risks they might face as the enter an area before they start “doing journalism.”

The Mexican map — Perriodistas en Riesgo — was created in 2012 and focuses on where journalists are under threat.

According to the Knight Center:

Attacks are divided into four categories: physical, psychological, digital and legal. Each category can then be modified by multiple subcategories. For example, a physical attack could be a kidnapping, beating, disappearance, murder, etc, and one attack, such as a reporter being mugged and having his cellphone and laptop stolen, could be categorized as a physical and a digital attack. 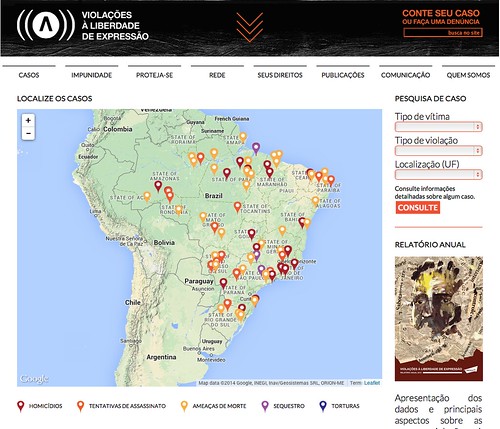 The Brazilian map — Violacoes a Liberdade de Expressao — casts a much wider net. It only started in November 2014 but does look at all forms of violations of freedom of expressions, including attacks on journalists and legal proceedings designed to silence human rights advocates.

The items on the Brazilian site are confirmed by Article 19 before being posted to the site.

It’s not often such a clear connection occurs, but when it does I am so glad.

The arrest is just one of many involving the endangered tree. According to the South China Morning Post:

China has long been considered the epicentre of the illegal timber trade, with Hong Kong often a convenient gateway due to the city’s status as a free port. As much as 30 per cent of the city’s timber imports were from illegal sources, a 2010 report by WWF Hong Kong found.

Rosewood is valued for its finish and resistance to rot. The tree is primarily found in Honduras and Madagasgar. It is protected under Convention on International Trade in Endangered Species of Wild Fauna and Flora.

This case shows — once again — that there are so many connections between different countries, if only reporters would look for them.

Granted, if would be nicer if the connections did not include destruction of vital natural resources or criminal activities.

Catching up: Chinese president says press had it coming

Chinese president Xi Jinping was forced to take an unscripted question from a Western reporter during President Obama’s visit to China last month.

After first seemingly ignoring the question, Xi doubled back to address the issue raised of visas for Western journalists by the reporter.

After first taking an unrelated, clearly scripted, question from a state-owned Chinese paper — which drew a quizzical facial expression from Mr. Obama — Mr. Xi circled back, declaring that the visa problems of the news organizations, including The Times, were of their own making.

Mr. Xi insisted that China protected the rights of news media organizations but that they needed to abide by the rules of the country. “When a certain issue is raised as a problem, there must a reason,” he said, evincing no patience for the news media’s concerns about being penalized for unfavorable news coverage of Chinese leaders and their families.

So basically Xi’s excuse for not issuing visas to Western reporters is the same excuse a husband gives when accused of beating his wife: It was all the other person’s fault.

The Committee to Protect Journalists reports another journalist murder in Honduras: Television station owner gunned down in Honduras.

Carlos Lauria, CPJ senior program coordinator for the Americas has it right:

“Honduras has a disturbing pattern of letting journalists’ murders remain unsolved and unexplained, perpetuating the cycle of impunity. Honduran authorities must launch an immediate and thorough investigation into the murder of Reynaldo Paz Mayes, fully examine all possible motives, and bring those responsible to justice.”

Part of the problem fully investigating the deaths of journalists — and taxi drivers and lawyers and anyone else — is that the Honduran government does not have well-trained law enforcement officers.

Some of that is changing, thanks to the US, Colombia, the EU and other countries. Together these countries are training special squads of police and prosecutors to seriously investigate crimes and to go where the evidence takes them.

Unfortunately, there are still too few of these trained (and vetted) investigators. But the number is growing.

Another problem is the rhetoric once a journalist is killed.

In the case of Paz, he had no background as a journalist. He was a political activist who set up his television station a couple of years ago to air stories and commentaries against the current government of Honduras. (Unlike, US stations, Honduran TV and radio stations are highly partisan.)

Paz received threats for his comments. So when he was killed, the immediate reaction from others also opposed to the Hernandez government was that Paz was killed for his political beliefs.

Juan Ramón Flores, owner of the television station CTV Canal 48 and president of the city chapter of  [the opposition party] LIBRE, told CPJ that Paz had received threats for years in connection with his political beliefs and, most recently, in relation to his on-air criticism of President Juan Orlando Hernández, who he accused of having undue influence over all branches of government. Flores said the most recent threats had been made in anonymous phone calls the week before the shooting. Paz had talked about the threats on his program, Flores said.

Other journalists in Comayagua, where Paz had his station, say they are not convinced he was killed because of his political views.

Without a doubt there are ethical and courageous journalists who have been killed because of their adherence to the idea of comforting the afflicted and afflicting the comfortable. They thrived on exposing the pandemic corruption in Honduras. They saw their mission as one to let the disinfecting light of truth help clean up Honduran politics and society.

And many of these journalists were killed because of their dedication to their craft.

However, too often many of the journalists killed in the past few years in Honduras may not have been slain because they were journalists but because of other factors in their lives.

The pay really sucks for Honduran journalists, so some have side businesses. Maybe a stall in a weekend market, or maybe a small store. Unfortunately for Honduras, extortion of vendors and merchants is wide-spread. Gangs demand a “war tax” from companies and many market vendors.

Refusal to pay the “war tax” is often enough of an excuse for gangs to kill someone.

In at least one case, the murder may have been a case of mistake identity.

There are also situations that can best be described as “wrong place, wrong time.” A journalist is in a bar or restaurant just as any normal person would be. And maybe, a gang leader is also in the same bar or restaurant, completely unrelated to the journalist being there. Rival gangs have been known to just spray a place with gunfire to get the one gang leader they were looking for. (Thankfully, these types of killings were few and far between. And now seem to have abated completely.)

When threats seem to come to journalist for their political comments, it is often because the journalist is looking into a local political leader who is in the hip pocket of a local narco. So the threat is not based on liberal v. conservative views but rather on the potential damage to a lucrative financial arrangement between a crooked politician and a drug dealer. And then, the murder is handled by the narco, not the politician. (Think of the Mexico situation, where — according to reports — a corrupt mayor handed over 43 students to the local narco.)

Politics has little to do with the threat. It is all about the money and the power.

Complaints by a local media outlet of the overreaching power of the national government are an annoyance, but not one that would lead to the killing of a journalist.

Will we ever know why Paz and most of the other murdered journalists were killed? I doubt it.

Again, because of the poor quality of criminal investigation in the country, we may never be able to get to the whole story about these murders. And if the funding and support for the special investigative units is cut — as many in the US opposed to the current Honduran government argue — we may never know.

The threats to the funding of training and vetting of honest police and prosecutors comes from the very people who scream the loudest about the poor system of justice in Honduras. If the U.S., Colombia and the EU withdraw their funding and training, there is little hope for full and fair investigations and prosecutions of murders.

Thanks to Roy Greenslade at The Guardian for pointing out the new Reporters Without Borders campaign to help journalists in Eritrea, Saudi Arabia and China.

Reporters Without Borders (RWB), the Paris-based press freedom watchdog, has launched a fund-raising campaign based around the plight of jailed journalists inEritrea, China and Saudi Arabia.

The Eritrean prisoner is Dawit Isaak, who has been imprisoned without trial for 13 years after being arrested along with other newspaper editors in 2001.

Isaak is reported to be dying slowly in a prison camp where detainees are tortured by being shut inside steel containers during periods of intense heat. And RWB has used that image of a container to publicise its campaign.