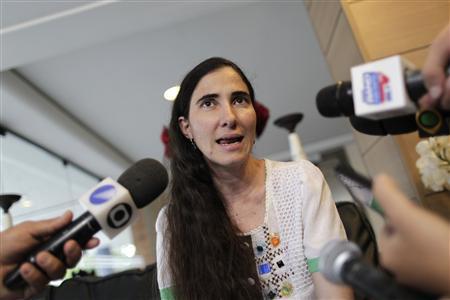 The latest in the Sanchez world trip has the blog writer and Cuban dissident showing that many in Brazil have not grown past the rhetoric of the Cold War.

[T]hose on the left hailing Cuba as a victim of U.S. aggression against communism while others praised Sanchez for fighting against political repression on the island.

“Mercenary, go to Disney,” shouted those opposed to her visit, repeating the Cuban government’s view that all dissidents on the island are on the payroll of its ideological archenemy, the United States.

At the same time others called out the Castro government as a dictatorship.

Guess refusal to see facts is not limited to just one ideology.

Cuban blogger Yoani Sanchez was blocked from seeing a film that featured her by protesters supporting the Cuban government. According the AP reports in Brazil say the Cuban embassy in Brasilia was instrumental in helping organize the demonstrations.

Oddly enough those complaining about Sanchez — for pointing out the lack of freedom in Cuba — have the right to demonstrate against here because Brazil is a democracy that tolerates dissent. Too bad that Pres. Dilma Rouseff did not speak out against this violation of Sanchez’s right to speak. (There are also reports that help for the demonstrators came from the president’s office.) Rousseff was also quite about the Cuban government suppression and arrests of dissident bloggers during her visit to Cuba last year.

Sanchez was recently allowed to leave Cuba after the Raul Castro government changed its travel rules allowing people to now get passports without having to first pass a loyalty test.

She will move on to about a dozen other countries to talk with free speech/press organizations and supporters. In the United States she will visit the offices of Google and Twitter.

Here’s hoping she gets the kind of coverage a brave person like her deserves in the U.S. media — and I mean the real press, not the right-wing blogs.

Once again the whole idea of libel as a criminal matter instead of a civil one has landed a journalist and his source in jail.

The Committee to Protect Journalists reported earlier this month (and Roy Greenslade blogged) that Somali freelance journalist Abdiaziz Abdinur Ibrahim was sentenced to a year in jail because he reported about about a woman who claimed she was raped by soldiers. The charge: Insulting the government.

The issue of criminalized libel is a serious problem for journalists trying to do their jobs. This issue is a growing concern among journalists.

The International Press Institute has a whole campaign to get Caribbean countries to change their laws. (IPI Campaign to Repeal Criminal Defamation in the Caribbean)

The bottom line is that even if the information is correct, individuals, organizations or governments can ask for criminal penalties against journalists if even one person thinks less of the subject of the story. The American idea of “truth as an absolute defense against libel” is not part of the equation.

A local-global connection that tastes good

Let’s hear it for WEMU and Arbor Brewing. The Michigan-based micro-brew set up a collaboration with a Belgium brewing outfit to share beer recipes.

WEMU (89.1 FM) picked up the story when others did not. (Maybe all those jazz and blues fans also like some good beers.)

Ypsi and Belgium Team Up for New Brews

Once again, if you just look beyond the surface, there are plenty of great connections between Main Street and the rest of the world.

If help comes and no one reports it, did it happen?

Loads of news organizations are following the disastrous club fire in Santa Maria in Southern Brazil. How can there not be a lot of attention when more than 230 people are killed in one incident?

Notes of sympathy and offers of help flooded the national, state and local governments.

A medication, called Cyanokit is needed to treat victims who inhaled cyanide poison as a result of the fire. The Brazilian health ministry put out a request for the drug and got it.

From the U.S. military, specifically the Southern Command.

The above link comes from the Department of Defense Public Affairs Office. And who reported this bit of altruism form the U.S. military? Damn few!

Reuters and AFP picked it up but a quick Google search shows NO U.S. news organizations carried the story. (The AFP story was seen in a Malaysia newspaper.)

Usually the U.S. military does a much better job publicizing its humanitarian work. The best example is the way SouthCom and the U.S. Navy 4th Fleet responded to the Haiti earthquake. (Military official: U.S. hospital ship in Haiti near capacity)

And then there are the numerous medical teams that go into remote areas of Central America to provide basic and intensive medical care to people who otherwise would not get ANY medical care. (I am going off to see one such operation this week.)

This is not a publicity space for the U.S. military, even though I think they often get a raw deal for their work in the Americas. (And yes, sometimes they deserve it for being tone-deaf in some issues. But by and large, the Pentagon understands the news media a lot better than the news media understand the military and they do a lot of really good work that helps a lot of people..)

The issue here is that no one in the United States is learning about the U.S. connection to help the fire victims. The medicine is made by a U.S. company (Pfizer) and it is being donated by the U.S. military.

There are so many local U.S. connections it is sad that not one U.S. news outlet picked up the connection.

But what else can you expect from an industry that more and more has been withdrawing from the world, with the exception of war or natural disaster.

Hell, one major network can’t even read a map. Notice how it misplaced Sao Paulo  by about 2,000 miles! About the same distance between San Francisco and Washington, DC. (If you don’t see the error, look it up yourself. You can start with: Sao Paulo is a coastal city and the industrial capital of Brazil.)